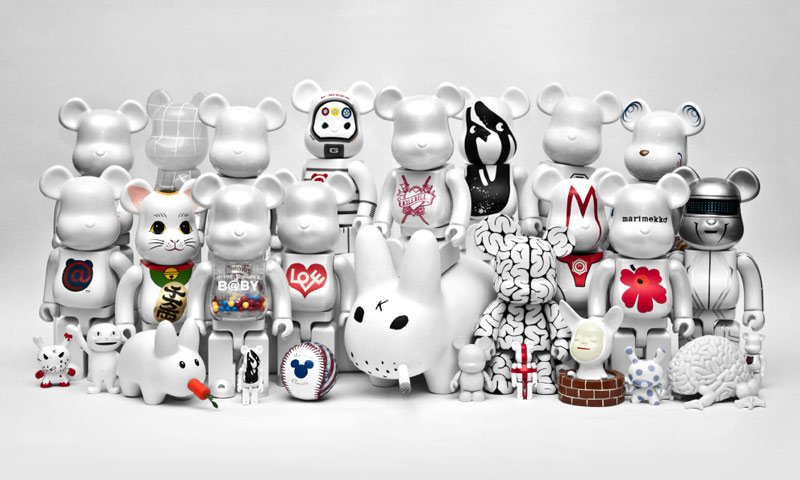 Question: Why a self- interview as a text for your catalogue of your collection of Artois.

Answer: First of all, to answer some of the questions the visitors to the exhibition or the readers of the catalogue might have; and, subsequently, who better than me could know the questions I have to ask myself.

Q.– Since when you collect little toys?

A.– I’ve been collecting little toys as you call them for a long time. I started with Mickey Mouse and Super Heroes; concerning “Artois” I started collecting them twelve years ago more or less.

Q.– What are “Artoys” exactly?

A.– It’s a toy that precisely “is not a toy”; that’s the tag that comes in the box containing them. In other words, they are not toys for children. It may seem a contradiction, but that’s precisely a defining characteristic: a toy that it’s not a toy.

Q.– That brings about the title of an exhibition curated by Pharrell Williams in the Design Exchange Museum in Toronto, Canada: This is not a toy.

A.– That’s right. That is an ingenious title because it plainly explains one of the main characteristics of Artoys.

Q.– Are Artoys substantial enough for an exhibition?

A.– If that was not the case my collection wouldn’t have been exhibited. Besides, it is not the first exhibition of this type on view in Spain. The Malaga CAC organized the most impressive exhibition I have ever seen about the collecting effort by Selim Varol of Artoys and Street Art. After being exhibited in Berlin it was shown in Malaga thanks to Fernando Francés.

Q.– I think you are overemphasizing the preceding events to justify your exhibition.

A.– I’ve got nothing to justify. The exhibition will talk by itself. If it raises interest, time and public will tell. 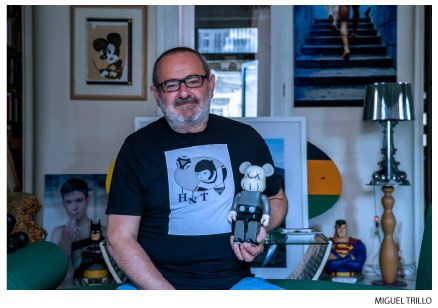 Q.– In any case, this is not the only collection you have.

A.– That’s right. My thing is rather a collection of collections.

Q.– Could you elaborate your response?

A.– With pleasure. Till now the collection that has raised more interest is my collection of contemporary art which is centered on photography.

Q.– why do you think this is like that?

A.– Very simple. Art, in capital letters, is always more impressive than a collection of little toys.

Q.– What’s your opinion on this issue?

A.– Contemporary Art, in capitals, is overrated if you take into consideration the little interest it has in recent years. But what is really overrated is the figure of the Collector.

Q.– Do you really believe what you say?

A.– After many years of collecting (i.e. accumulating) Contemporary Art, visiting exhibitions, art fairs (too many fairs) halfway across the world, if there is something saturated and overvalued is the figure of the Collector.

Q.– What do you think this phenomenon is due to?

A.– No doubt it is due to globalization and the insecurities of Art Fair organizers. They have to reassure their clients (Art Galeries)that thanks to these scheduled programmes they are going to attract new clients, new art buyers. These buyers subjected to the performativity of fair rituals are going to be transformed, as if under a magical spell,  from simple white little lambs ready to be shorn and plundered into Art Collectors.

Q.– Let’s go back to your Artoys collection. How did it start?

A.– I’ve been collecting Mickeymouses and action figures (Batmans, Supermans, etc.) for a long time. It was twelve years ago approximately that I discovered Artoys. They offered me an unexpected synthesis between two of my collections: that of art and the one of little toys. 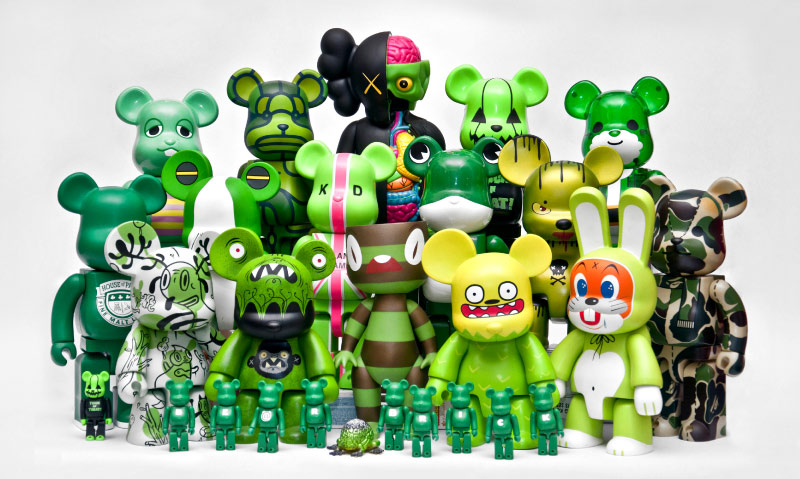 Q.– Which was the trigger of your choice?

A.– No doubt Mickey Mouse is the origin of my toy world.

Q.– Could you elaborate on that?

A.– The first Artoy I bought was a Be@arbrick by Kaws.At that moment I was not aware of the perfect synthesis. Be@arbrick has become nowadays the collectible Artoy par excellence. Kaws is the most important artist that produces  Artoys and the Be@arbrick specifically represented the unavoidable continuity between Mickey Mouse and the Artoys. Mickey Mouse’s gloves and buttons in the trousers were the evidence.

Q.– Could it be said that this first Artoy prompted your collection?

A.– That was the case, structurally; another matter could be the circumstantial aspects.

Q.– What do you mean by “circumstantial aspects”?

A.– collecting this type of pop objects in this country that continues to be anchored on the brazier table, on nineteenth-century issues and other “problems” nobody else in the (modern) world is interested in, is a real challenge.

Q.– It seems that you don’t sound too interested in the domestic scene.

A.– Well, really not in the slightest bit. But the circumstantial aspects may refer to how complicated it could be buying the toys through EBay in Hong Kong or in shops in Paris for New York. It is so complicated that a lot of Japanese websites do not sell their products outside Japan.

Q.– Why this fixation with Be@rbricks?

A.– It has always been the most active platform. There are others like Oee’s and Dunny, but they are far from the frantic production of Be@rbrick. As it is an anthropomorphic bear it brings to mind the Teddy Bears and connects with that much older tradition. The name itself is an enigma for the uninitiated. MediCom Toy Inc started to make the series called Kubrick as a homage to film director Stanley Kubrick. But it’s also a word play; “ku” means nine in Japanese, and “brick” refers to the pieces the toys are made of: nine pieces that are exactly the number of pieces that the Be@rbricks contain.

Q.– What other characteristics would you highlight concerning the Be@rbricks?

Generally they are made of plastic, although some editions have been made of solid wood, with velvety finishings, and other materials like carbon fiber.

Q.– In addition to the platforms already mentioned, which other artists are you interested in as creators of their own Toys?

A.– Kaws and Ron English. Both have made Be@rbricks but they also count on their own production system. Kaws has collaborated for a long time with MediCom Toy for the production of his own Toys, but for some time now he produces he produces his own Toys himself. Ron Elglish markets his products through Popganda. These two are the most active and those who produce the most interesting Toys.

Q.– If you had to point out an artist among those who produce Toys, who would you choose?

A.– Kaws. No doubt. An artist that has exhibited his work in some of the most important galleries in the world and who produces exhibitions in many museums with giant sculptures that later on are transformed into Toys. He is the artist who has enjoyed the most meteoric trajectory since he started to scribble his billboards in New York, and to show his work in museums. In the Malaga CAC could be seen an outstanding exhibition some time ago. He combines perfectly his work as an artist, as Toys creator, and as designer of T-shirts for Uniqlo or sport sneakers. His favorite characters are the Simpsons or the Peanuts. It is this creative capacity what strikes me as a source of wonder: all his initiatives lead to success.

Q.– what are your favorite characters that have been reinterpreted by Toy designers? 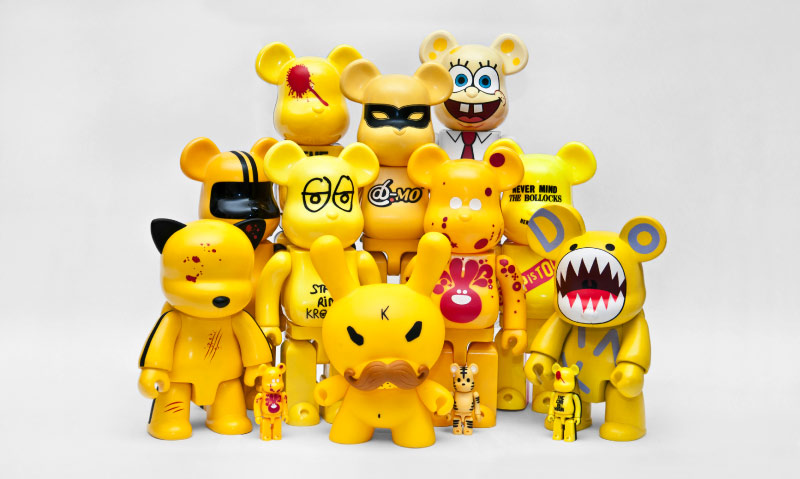 Q.- Why ave you included Alessandro Mendini in your catalog  if he hasn’t done any Toys?

A.– Because of a special coincidence in my collection and because certain works by Mendini are parallel discoveries. Many years ago he designed a pot for Alessi. Recently he has released a series of bottle openers. It is always the same object but it is inevitably repainted by him, sometimes by hand. It’s a concept that is similar to the platforms of Toys.

Q.– Behind all this movement, which is the common denominator?

A.– I like saying that the current pop movement par excellence under the “featuring” culture which translates as some sort of “collaboration”. Pharrell Williams features  Kanye West, who in turn asks Kaws to produce the cover of one of his records. Then Kaws explains that he started to paint the Simpsons commissioned by Pharrell. Pharrell designs clothes and is a close friend of Nigo, the Japanese designer that has created the brand Bape, which in turn has produced numerous Be@rbricks. Nigo collects, as Pharrell does, pieces by Kaws. Another Japanese brand, Comme des Garçons, has collaborated in many occasions producing Be@rbricks. Besides Comme has made especial versions of the classic t-shirts Lacoste and Fred Perry, reinterpreting the brand. In addition they have made especial versions of other t-shirt brands. Kanye West, Pharrell Williams, and Kaws are usual collaborators of sneaker brands like Nike and in the case of West, with Louis Vuitton. He in turn has recently made a especial collaboration with Supreme, one f the most appreciated brands of “Street Wear”. All this is really fascinating, provided that you are interested in the authors of these collaborations, of course. It is evident that Artoys are directly related to the world of “Street Art” and evidently Andy Warhol in another of the coincidences in the Artoy world.